Similar to how an iconic sitcom character once questioned whether a broom was still the same one despite having its head and handle replaced several times, Biomutant also constantly has you asking if the weapon you’re currently using is indeed the same one you began with. Because sure, while this blade with a handle made out of wood may have started out weak, it certainly won’t be once you’ve collected enough scrap to craft something even more threatening and powerful. This is just one of many ways that Biomutant rewards your experimentation via its heavy emphasis on customisation, both of which helps differentiate it from other, less inventive open-world games out there. Admittedly, it may lack a little flair and polish in certain aspects, but overall this is a fun, somewhat scrappier take on a genre that sometimes feels it’s due a reinvention.

Set in a land where most life on Earth has been choked out by toxic waste and fossil fuels, Biomutant is a different type of open-world actioner where player choice is promoted over and above almost anything else. You’ll start off by creating your own version of the titular critter, before continually exploring and levelling them up in order to breathe life back into the world tree that sits at the centre of this strangely beautiful post-apocalyptic world. This you must do by two means: by preventing the four worldeaters threatening life at each end of the map, and uniting the six warring tribes who must work together towards this common goal.

Upon first glance, such a setup might seem quite rote, but Biomutant presents it through such a quirky lens, I hardly ever noticed how generic the story truly is. Instead there are far too many other unconventional aspects on the mechanical and exploration side perfectly primed to distract you. Plus, it helps that almost every character you meet is an anthropomorphic rodent like yourself, each with their own charms and personality. Outlandish as it may be, you buy into it easily because developer Experiment 101 – made up of ex-Just Cause devs – has added a great amount of texture to this environment through the in-game narrator’s explanations and its own made-up glossary where “microwave” now suddenly equals Fry Sparker and trains are referred to here as Chugga-Chuggas. Small elements like this make playing Biomutant often feel like reading a Terry Pratchett or Roald Dahl novel.

At its core, Biomutant is open world by Frankenstein game design, in that it takes plenty of elements from other genre mainstays but also bolts on a boatload of other features you’ll know from elsewhere. Loot system? Check. Breath of the Wild-style gliding? Why not. How about outposts to pillage? Of course. Just when you think you have some idea of its structure, though, you’ll venture yet another traversal ability or an all-new hidden layer to combat you previously didn’t engage with for the first 5 hours of play time. Biomutant is particularly good at surprising you, especially early on. 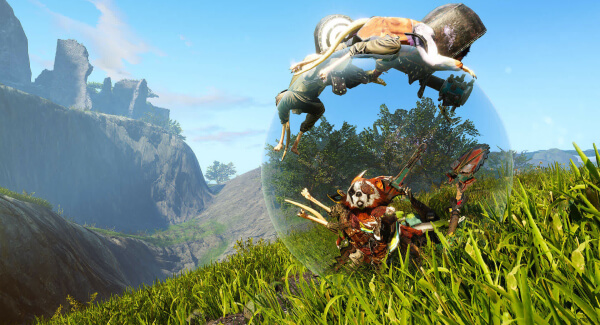 So yes, as well as meeting characters and performing side quests, a lot of your time is spent fighting enemies and searching for scrap. However, both aspects directly inform and influence each other, seeing as almost every material you find goes some way towards enhancing your own Biomutant’s combat skills. A simple toothbrush sword, for instance, needn’t stay that way for long. Simply hop into the game’s crafting menu, ensure you have the necessary resources, and you’ll soon be wielding ranged and melee weapons of your very own design. The same ethos applies to gear too, which you can further craft and customise to enhance natural character aspects like armour, strength and even certain elemental resistances. The latter feels very Zelda-inspired, as only by wearing specific suits can you withstand the toxic hazards of select areas. It opens up yet another avenue to explore.

Such high flexibility in combat, however, can come at the cost of precision. Because while the cacophony of acrobatics being displayed on screen is always a visual treat, the automatic lock-on is rickety and slashing at foes with your customised weapon is very button mashy – largely because almost enemies can take a lot of hits to defeat. Levelling up your character to unlock further combos depending on your preferred weapon type helps negate some of this lacking feedback, but it never quite feels as satisfying it perhaps should. Nier: Automata this is not. That being said, however, having so many different facets to combat… it’s a miracle switching between guns, melee weapons, psychic powers, mutations and back to guns again even works well at all. It’s something to be commended.

Another area where Biomutant slightly falls down is in its repetitive environments. Because while the overworld itself is full of interesting territories and societies to seek out, much of your time completing side quests will take you to the same underground bunker. This problem becomes more evident when taking down each enemy tribe’s various forts, and you come to realise that the look and layout for each is always the exact same. Luckily, how you go about taking them down is always different – ranging from defeating different enemy waves, or a mini-boss fight, to even a simple negotiation with the tribe’s chief depending on if you play light or dark – but its an odd oversight considering Biomutant’s bold ambition in other areas. Repeatedly being greeted by the same interiors over and over takes you out of proceedings. 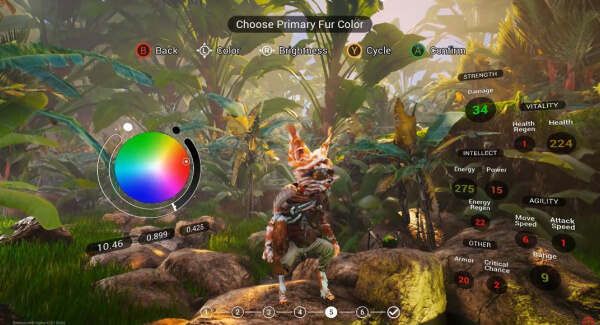 Biomutant can also be a little sluggish on the technical side of things, with framerate hiccups and camera angles falling through the world being a common sight. There was even one instance where the game outright froze and forced us to restart, but luckily the game saves often enough that it wasn’t too demoralising. For reference we played the PS4 version ahead of its planned day one patch on a PlayStation 5 and still witnessed plenty of hitches, yet hopefully it’ll get ironed out soon after launch.

Not all facets of Biomutant’s “everything and the kitchen sink” approach pays off, but slight technical and mechanical pitfalls are easy to forgive due to the sheer scale of its zany ambition. This now easily ranks as one of the most creative open-world games out there, and it’s all wrapped up within a charming universe and story that feels wholly original. Sure, combat might not be as tight as it needs to be despite the impressive flexibility on offer, yet for every instance like this there’s sure to be another area where Biomutant does delight. For the most part, this is the post-apocalyptic Rocket Raccoon game we’ve all been waiting for.

4/5
Providing you can get past the odd technical hiccup and ill-balanced mechanic, Biomutant is a fun time for people wanting to avoid the tediousness of other open-world games. In no other game can you pilot a mech, surf the waves and glide off cliffs, all while watching your central character grow over time.

Biomutant is out tomorrow on PlayStation 4, PC and Xbox

Get the best Biomutant price below: