Given Assassin's Creed: Origins is the series' tenth entry, and the past couple of games haven't quite made the splash that the first games did, Origins is getting quite a bit of hype. Part of this is because of the revamped gameplay mechanics that retain the series' famous stealth mechanics but improve the fluidity of the combat and the movement. Part is the game's setting; Ancient Egypt has long been a requested locale by the fans, and now it's finally here.

And if what you've seen of Origins so far is enough to tempt you to dip your toe in the water of this console generation for the first time, Microsoft and Xbox may well have the deal for you. This week, three new hard bundles (where the console and game come packaged together) for the One S have been announced.

The first two feature the game alongside either a 500GB One S or a 1TB version. 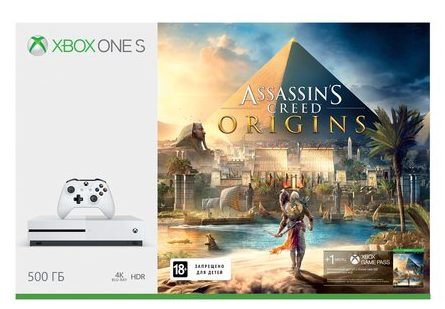 The third and final bundle (pictured at the top of this post), titled the Assassin's Creed: Origins Bonus Bundle, comes with the game, a 1TB Xbox One S and 2015's Tom Clancy's Rainbox Six Siege. While initially seeming like a slightly unlikely match for Assassin's Creed, the Rainbow Six Siege franchise is also made by Ubisoft, which goes some way to explaining why they're packaged together.

As of yet, there's been no word on any hard bundles that combine the One X and Assassin's Creed (or any other game, for that matter). This is despite Origins being one of the first One X 'enhanced' titles designed specifically to make the most of the what the new Xbox has to offer. It looks likely that we won't see any One X hard bundles for the first few months after the console launches.