While it’s commonplace for every console you buy to provide you with one right out of the box, gaming controllers, like any form of hardware, are constantly being iterated upon. Professional eSports players know all about this, often searching beyond the Xbox One, PS4 or Nintendo Switch’s standard gamepad to find a controller that is more adaptable and suited to their preferred way of play. PowerA is a manufacturer that aims to help in this, having built numerous accessories that works to enhance the gaming experience.

Chances are that you’re already familiar with PowerA gaming controllers, but just haven’t really noticed them explicitly before. That’s because PowerA is known for doing an exceptional job with their gamepad designs – to the point that it can be extremely hard to tell the difference between their products and official first-party controllers engineered by the likes of Microsoft and Nintendo.

Here we’ll cover everything you want to know about PowerA gaming controllers, including which retailers stock them, what advantages they might grant you, as well as what platforms they are available for. So, without further ado, let’s get into it: 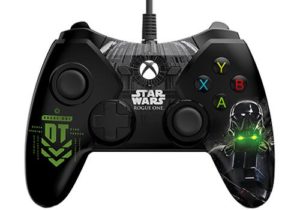 You’re probably wondering why we’ve decided to highlight Power A gaming controllers specifically. And it’s a fair question! The simple reason is because it’s one of the few manufacturers to officially licence brands for their controllers, meaning you can get PowerA Xbox One controllers centred around Star Wars, Nintendo Switch controllers featuring characters like Mario, Link and Donkey Kong, and plenty more. A lot of third-party gamepads like to keep things simple from a design perspective, but PowerA has made a point of accommodating the tastes of all types of player.

PowerA Controllers also manage to strike the correct balance between being well designed and affordable, never sacrificing quality or comfort. Most of the PowerA controllers you’ll come across are also wired, which is ideal for players that don’t want to have to worry about latency issues. Your button inputs will always be well registered.

A few things we don't like about the PowerA gaming controller

While it's true that PowerA gaming controllers have a lot of great benefits, there are also a couple of drawbacks worth bearing in mind, The most obvious of which is the fact that there are currently no PS4 PowerA gaming controllers in development. This means players with a PlayStation 4 are ostensibly missing out on all the unique gamepad designs we'll list more in-depth later, forcing them to rely on other third-party controller manufacturers. This predicament is obviously a factor Xbox One and Nintendo Switch players needn't worry about though.

Another negative factor for some, might be in how few wireless PowerA gaming controllers there are on offer. Wireless controllers have become the norm ever since the days of the PS3 and Xbox 360, so the idea of suddenly being tethered again to your console might understandably less appealing. Cutting out the tech needed for wireless play, however, is likely what allows PowerA to keep the cost of its gaming controller selection relatively low, being more suited to younger children at risk of breaking them regularly or professional eSports players that don't want to experience any latency or lag during tournaments. It's not a deal-breaker by any means, but could be an issue for players that are used to being a certain distance away from their TV.

While most other third-party gamepad manufacturers either only sell their products solely through their own site, PowerA gaming controllers are widely available at a range of popular UK retailers. This is because the company has built up well-established relationships in the seven years since its establishment, giving players the choice to grab their PowerA gaming controller from such places as GAME, Amazon UK, Smyths and Argos.

Below you’ll find the best prices on from all these retailers on the Legend of Zelda-themed Wired controller, just as an example: 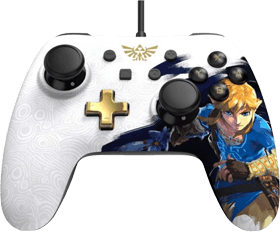 PowerA currently design and develop gamepads for two out of the main three console platforms: Nintendo Switch and Xbox One. Obviously, this will leave some players wanting. But there’s plenty of other third-party gaming controller manufacturers working on products for PlayStation 4. In the meantime, players can enjoy their fill of both Switch PowerA controllers and Xbox One PowerA controllers, each being officially sanctioned by the relative platform.

The benefit of PowerA getting the go-ahead from companies like Nintendo directly, is that the quality bar is raised much higher and certain classic controller designs can be replicated for a modern audience. The PowerA GameCube controller is a good example of this, coming in both wired and wireless perfect for Super Smash Bros. aficionados. Take a look below: 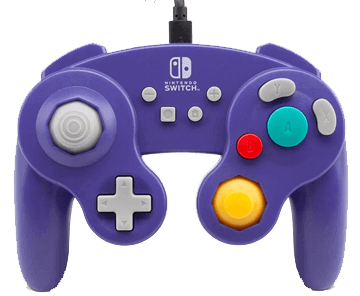 We’ve already highlighted some of the most creative designs found with certain PowerA gaming controllers, but we’d thought it worth showcasing some individually. Console Deals currently only covers PowerA controllers available for Nintendo Switch. Here are all those listed at the best price:

Overall, if you're a player wanting to showcase your passion for gaming but are looking for something a bit different to Nintendo and Microsoft's first-party line-up of gamepads, you can't go wrong with almost any one of the PowerA gaming controllers available. This obviously isn't much help for those playing solely on PlayStation 4, but their excellent build quality, variety of designs and wired nature makes them an extremely tempting (and much cheaper) prospect than other third-party controller solutions out there.