With it being three months into the year already and the new consoles expected to release Holiday 2020, it was inevitable that we’d start hearing some new information regarding specs, graphical capability and price sometime soon. While we still might be left wondering on the latter, it’s now been officially confirmed that the Xbox Series X will launch with a 1TB Custom NVMe SSD for on board storage. 1TB might sound like a lot but considering the size of some game installations these days, it really isn’t.

For instance, the 4K-ready Xbox One X model currently being sold also  features 1TB, which doesn’t leave a lot of room when you consider that a game as recent as Red Dead Redemption 2 requires a whopping 107 GB to play – over a 10th of the Series X’s planned storage capacity. Suddenly you can see why a certain subset of players are disappointed to hear that the new Xbox Series X won’t be upping the terabyte capacity.

The main concern is that it won’t take long to fill up Xbox Series X’s 1TB, especially when you consider that Microsoft is again touting their new box as the “world’s most powerful console.” Whether it still lives up to this claim rests on Sony’s shoulders and what they have planned for PlayStation 5. However, its safe to assume that with developers pushing game graphics with added features like raytracing and veritable rate shading, any title that you need to download and store digitally will eat up a lot of the Series X’s onboard storage. 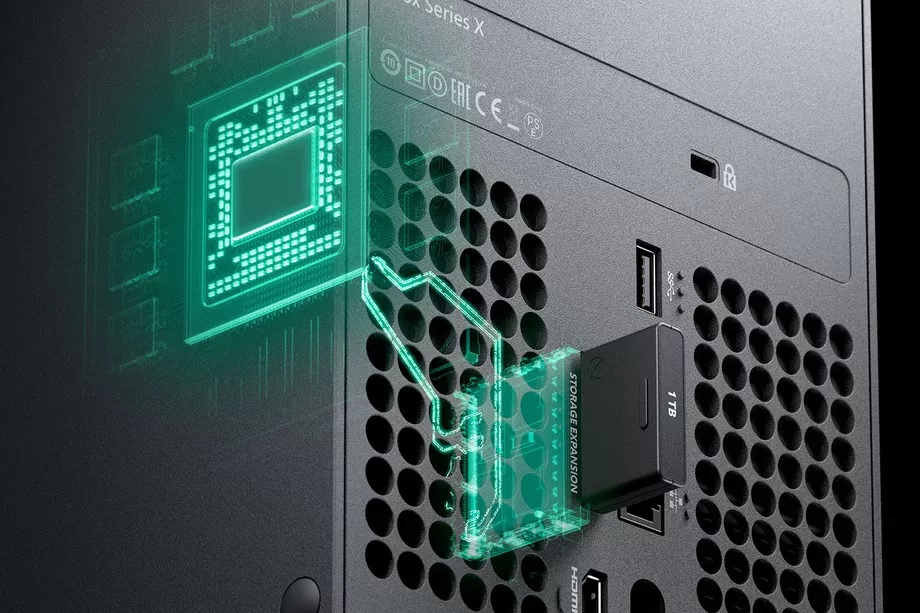 So how does Microsoft plan to resolve this? Well, simply put, by offering players with a reliable way to expand this storage. For most Xbox players this will be nothing new. Right now anyone with an Xbox One, PS4 or even Nintendo Switch can connect their console to an external hard drive and keep it close by in order to play top games. However, whereas storing your games on USB storage works perfectly fine, you won’t be able to play Xbox Series X games in this way. Why? Because Xbox Series X games are required to be read at a high-speed level. The information wouldn’t be able to be read fast enough from your external hard drive to your TV without a noticeable delay.

As part of Microsoft’s March crop of new details, it sent an Xbox Series X devkit out to tech YouTuber Austin Evans who went in-depth on this issue. Take a look:

So, if you want more than 1TB of storage space on your Xbox Series X you’ll need to invest in what’s called a proprietary Seagate expansion module. Veteran players will have noticed that it looks and operates much like memory cards back in the PS2 days used to. It’s a small, card-shape expansion pack that slots neatly into the back of the Xbox Series X console. Many eagle-eyed tech obsesses had long been pondering what this mystery port located on the rear of the console would be for – now we know for sure it’s to allow for more storage.

And there you have it. The Xbox Series X might only launch with 1TB of internal storage capable of reading Series X games, but should you ever grow tired of deleting old games in order to make space for others, you can rest easy knowing that a Seagate expansion module will do the trick. The one remaining mystery, however, is just how much they will cost. A standard 1TB external hard drive will normally set you back around £50, so here’s hoping this proprietary bit of kit will be priced at around the same.