Released worldwide in March 2017, there was only initially one model of the Nintendo Switch available for people to buy. Now, almost three years later, however, two new models have been added to the console family, with UK retailers stocking the original Nintendo Switch, a slightly revised version with better battery life, and a sleeker, more affordable iteration known as the Nintendo Switch Lite. That’s three different models in total for the Nintendo Switch – each boasting their own slight differences.

But what are the different Nintendo Switch models and which of the three should you buy? The answer, of course, will entirely be subjective depending on your needs. Are you someone that wants to play games on the move for longer? Maybe, just maybe, you’re someone that could live without ever needing to play your Nintendo Switch on the big screen, happy to save some money for the privilege. Whatever the type of player you are, there’s a Nintendo Switch model for you. 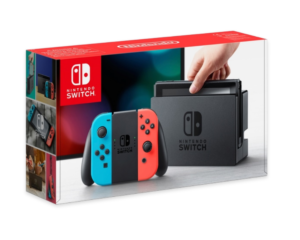 The first Nintendo Switch model to release delivered on what was previously thought impossible, gifting players a console that works just as well played on the go as it does on the big screen when inserted in the dock. While packing in less horsepower than its PS4 or Xbox One competitors, the original Nintendo Switch was quickly taken into the hearts of many players for this unique hybrid nature. Despite this, released alongside one of the best showcase games in The Legend of Zelda: Breath of the Wild – outright proving its potential as a home for great first-party exclusives.

Should you buy an original Nintendo Switch? Well, up until recently we’d have given you an unequivocal yes. The first model out of the gate is an incredibly well-designed product, seamlessly letting you switch between playing portably and at home on the fly and featuring two controllers right out of the box via the Joy-Con that can attach and detach from the main Switch unit.

The slight issue with your purchase decision comes in how the original Nintendo Switch is now being subtly replaced by a new rendition, which is largely the same, but offers players longer battery life thanks to improved hardware. However, the existence of Nintendo Switch 2.0 does mean that the price of this original model could dip, also making it a viable option for people looking to save money by grabbing it pre-owned or refurbished from second-hand retailers.

What’s the difference between the original Nintendo Switch and the new model?

As already mention, not a whole lot. But the main difference might be enough to sway the purchase decision of some players. Essentially it all boils down to battery life: With the original launch model you get battery life ranging between 2.5 and 6.5 hours, whereas with the new Nintendo Switch 2.0 model it ranges between 4.5 and nine hours.

Where can I buy a cheap original Nintendo Switch?

The price of Nintendo Switch consoles is constantly in flux, but a great way to track one down on the cheap is to use the price comparison filters featured here on Console Deals. This will save your scouring the web pages of various UK retailers. Alternatively, seeking out a pre-owned original Nintendo Switch model is sure to shave off a bit of cash from the price.

Does the original Nintendo Switch still have games released for it?

Yes, all Nintendo Switch models play the exact same games. Visually they will all be rendered no differently from one another.

Should I trade in my original Nintendo Switch?

If you’re considering upgrading from a launch Nintendo Switch to any other of the two models, you’ll see a huge difference in how long you’re able to play. If you like to play your Switch away from your dock or charger for extended periods of time, then you likely are always running the power down to depletion. A Nintendo Switch 2.0 or Nintendo Switch Lite could resolve that, possibly being enough cause to trade in your original Nintendo Switch. 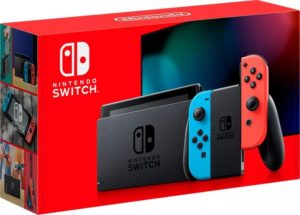 The only problem with this new Nintendo Switch is distinguishing it from the original model, due to it having the exact same design and same screen size. Thankfully, there are a few cool tactics you can employ to guarantee yourself the console with the better battery life. For one, it features an entirely different-looking box. Whereas the original packaging featuring an image of the console with a white surround, the new batch of improved Nintendo Switches now opt for a deep red. Another way of checking it’s the newer hardware model is by looking at the serial number. If it starts with XKW, then that indicates it’s the new one.

Is the battery life difference worth it?

Whether or not you should seek out and upgrade to the 2.0 version is entirely dependent on how you’ve been coping with the normal Nintendo Switch’s battery life so far. Graphically intense games like Skyrim and Zelda, for example, will drain it faster. But if you typically play smaller games, you might not need the added three-hour boost. That said, if you’re buying your first console, we’d say definitely opt for the new Nintendo Switch if you can.

Why does the new Nintendo Switch even exist?

Technology and hardware advances so fast these days, it’s become commonplace for current-gen consoles to undergo revisions midway through their lifecycle. Usually there’s a lot more fuss made about it, but not in Nintendo’s case apparently. 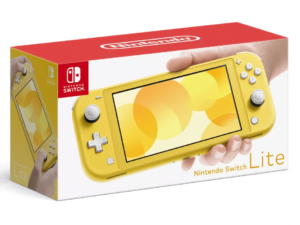 Best described as a much slimmer, sleeker and more affordable take on the launch Nintendo Switch model, the Nintendo Switch Lite is a version of the hybrid console that is intended for portable use only. Ostensibly this means that it’s a Nintendo Switch that doesn’t switch, which might seem strange, but results in a much cheaper point of entry to the platform for most people.

Performance-wise, the Nintendo Switch Lite is almost the exact same as the original Nintendo Switch console. It is still able to play all the games from the great library already curated by the Nintendo Switch, albeit only in portable mode. The most differences are seen in the actual design, with the new Lite version boasting a slightly smaller 5.5” screen compared to the first model’s 6.2”. Also, as you’d expect from a console model called the “Lite”, it’s around .20ibs lighter.

Because the Nintendo Switch Lite can no longer be docked and played on the big screen, there’s obviously no need for the Joy-Con to be detached from the main unit any longer. As such, the Joy-Cons are now built into the actual console itself, making them incredibly harder to lose now. Other advantages include the Switch Lite’s improved battery life, which now lasts between 3 – 7 hours compared to the Original Nintendo Switch’s 2.5 – 6.5 hours. It’s marginal, but something.

How much cheaper is the Nintendo Switch Lite?

The Nintendo Switch Lite currently has a typical RRP of £199.99, making it roughly £50 cheaper than the standard Nintendo Switch on shelves. This does come at the cost of sacrificing a few features, such as the lack of TV support and inability to remove both Joy-Con from the side.

What colours is the Nintendo Switch Lite available in?

Whereas the launch Nintendo Switch model offering players a choice of Neon Red and Blue or simply Metal Grey, the Nintendo Switch Lite offers three new colours that cover the entire console (and not just the Joy-Con). Those three colours are none other than Light Grey, Yellow and Turquoise, all of which have been painted in a beautiful pastel tone. There is a limited edition Pokemon Lite model due out in November, mixing the standard Light Grey with infographics of the two new legendary creatures.

Will there be any Nintendo Switch Lite exclusive games?

No, all versions of the Nintendo Switch share the same library. This helps avoid any confusion that would come from dividing the Nintendo player base.

While Nintendo hasn’t rolled out the red carpet too many times when it comes to releasing timed or limited-edition versions of the Switch, there’s been a handful of occasions where Nintendo fans could nab a cool-looking variant. Here’s a brief look at them:

One of the most colourful console variants to release yet, every aspect of this Nintendo Switch console has been touched at least a little by some Animal Crossing magic. The Joy-Cons, for example, are pastel Blue and Green while the dock is coated in a warm cream with Tom Nook and family depicted in the corner. Then, as if that wasn’t enough, the back of the Switch screen is patterned with memorable Animal Crossing icons.

Nintendo isn’t a publisher known for catering to the mature gamer crowd, but that didn’t stop a beautiful limited-edition Diablo III variant from hitting store shelves. This Nintendo Switch boasts a fairly restrained look overall, retaining the standard model’s cool grey Joy-Cons but coating the dock with some hellish-looking infographics. What’s more, this bundle even came with an exclusive case to tie the whole package together.

The one and only limited-edition Nintendo Switch Lite was released in conjunction with the launch of Pokemon Sword and Shield – and it didn’t disappoint. Suitably named after the games’ two new legendary Pokémon, the Lite model itself features both Zacian and Zamazenta pictured on the back, while the analogue sticks and face buttons evoke Sword and Shield’s blue and red aesthetic.

Get the cheapest priced Nintendo Switch with Console Deals

Now that you’re a certified pro regarding all three different Nintendo Switch models, you’re in prime position to take the leap and purchase one for yourself. Thankfully, we at Console Deals make it easy for you to find the best price for all three Nintendo Switch consoles, making it easier to get the specific one you want at a cost that’s ideal due to our accurate price comparison and regular updates. Hit the button below to see every single Nintendo Switch bundle presently out there.