Super Smash Bros. Ultimate is the big, meaty brawler you can’t help but love. It’s the first Super Smash Bros on the Nintendo Switch and everyone’s saying it’s a joyous and dizzyingly brilliant game. We can’t argue with that.

How well you fare in a brawl does depend on the controller you use though. We’re not saying you can’t get by with a single Joy-Con (because you can) but we are saying you’ll be at a significant disadvantage when facing someone with a Pro Controller. That’s because in the wonderful world of Super Smash Bros, fast controller input is essential to land the biggest hits and avoid the very same.

Remember, this is a game where Sonic can beat up Pac-Man and you can instil your character with the spirit of Mega Man. It’s always chaotic and therefore those who can rise above it all and master their moves tend to reign supreme.

The truth is whatever controller you use, there’s a learning curve. But, once you get the hang of your preferred controller, you’ll smash it.

Which is the best controller for Super Smash Bros. Ultimate? To help you on your way to finding the controller that’s right for you, here’s everything you need to know about your main options. There’s five main options to choose from.

Don't forget, you can buy all of these controllers (and more) via our Nintendo Switch controllers page. 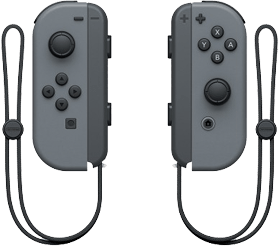 Great for: Player eight, or as a back-up.

You can play Super Smash Bros. Ultimate with two Joy-Con independently in each hand, or together as one game controller with the Joy-Con Grip.

Joy-Cons are the smallest controllers compatible with Super Smash Bros. Ultimate, and they are by far the hardest and most frustrating to play with because of this. The best setup is using the Joy-Con Grip; using two Joy-Con independently in each hand has a steeper learning curve and offers no real gameplay benefit.

In terms of controls, each Joy-Con operates as a standalone controller and offers the very same input as the Pro Controller only on a much smaller scale. You can easily grab two Joy-Cons and jump into a brawl. You might even do well out of it. However, because of their size, Joy-Con controllers are best reserved for player eight or those times where there’s no other option but the Joy-Con. Don’t expect to smash it up with these.

Editor’s tip - if you’re serious about getting the most from Super Smash Bros, ditch the Joy-Cons for something more substantial like the options below. 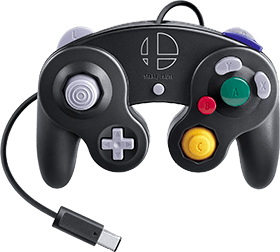 This is the purist's choice and many Super Smash Bros fans will never try anything new because it offers a nostalgic - and in their opinion optimum - experience.

The original, official wired GameCube controller is fully supported by Super Smash Bros. Ultimate so those of you with an old controller gathering dust can pull it out and relive your golden days (or buy a new one). It works exceedingly well and is far more usable than one or two Joy-Cons. The limitation is the wire but who cares about that? This controller gives your fingers and thumb the space they need to really compete.

Nintendo have also begun manufacturing more GameCube pads, so you don't need to scour second hand shops to find them. New pads are distinguished by having the Smash ball logo in the middle rather than 'Nintendo GameCube'.

Editor’s tip - to use a wired GameCube controller you will need an adapter. They support up to 4 controllers. Unfortunately, the official adapter has been delayed until May 2019 - so you will need another solution if you're to use this option. 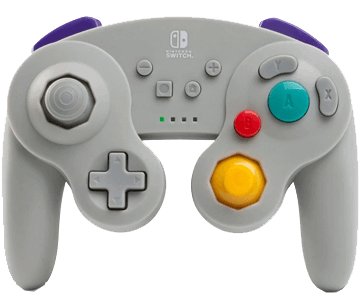 Great for: those wanting the GameCube experience without wires

Unfortunately, the PowerA wireless GameCube pad doesn't come with a rechargeable battery (it uses AAs) and has no rumble function, but for serious Smash players, this could be the option for you, particularly with a price point that hovers around £15 lower than the Switch Pro Controller. 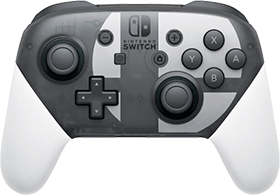 Great for: Everyone. Casual gamers and younger players will love it.

For newbies and those returning to the game, this is the best controller to jump right in with. It’s super-easy to use and boasts the best ergonomics.

Yes, it’s rather expensive, but honestly it’s so nice to hold and use that it’s 100% worth the money. The Nintendo Switch Pro Controller has a single + Control Pad, two analogue sticks and independent X, A, B, Y buttons. You can play with the standard Pro Controller or bag the Super Smash Bros. Ultimate Edition version, which comes with the Smash logo and white grips. It looks the business.

The key to the Pro Controller’s awesomeness is that everything’s spaced out to perfection,. It supports motion controls and has a powerful HD rumble for an immersive brawling experience. With this controller in your hand, Super Smash Bros. Ultimate comes to life.

Editor’s tip - the Switch Pro controller has an in-built rechargeable battery. If it dies, you can continue playing by plugging it into the console dock or wall. 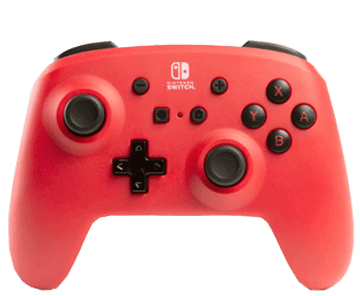 Great for: Experienced and advanced gamers. The mappable buttons are really handy.

If you like the Pro Controller but fancy something a little bolder and more customisable, the Power A Enhanced Wireless Controller is just the ticket.

This controller is officially licensed by Nintendo so while it is third party, it’s got Nintendo’s approval. It feels incredible in the hand, and it’s very hard to tell the difference between it and the Pro Controller. The key positive difference is the two mappable Advanced Gaming buttons on the back. The left and right mappable rear buttons sit under your middle fingers and can be programmed to replace any control. It’s dead easy to configure those custom controls - you just hold down either button and assign it when prompted.

Two downsides of the PowerA controller are the fact it uses AA batteries (rated for around 30-hours with good quality batteries.) rather than a rechargeable battery, and has no rumble feature.

The icing on the cake is the huge variety of controller designs available. There’s something for everyone.

Editor’s tip - there’s no wired option for this controller so make sure you have a supply of disposable or rechargeable AA batteries to hand.

Thanks for reading, and don't forget, if this guide has helped you decide which controller to buy, we've got all the best prices on Nintendo Switch controllers here.