The following is an eclectic mix of co-operative Nintendo Switch games, ranging from cell-shaded first-person shooters full of loot to brick-ified versions of your favourite Pixar film. This ensures that, whatever your gaming tastes happen to be, there’s sure to be something for you and a friend to indulge in. While most likely known primarily for being the perfect console for kids, Nintendo Switch actually has plenty of 2 player games to cater to all types of gamer. And now is the time to prove it: 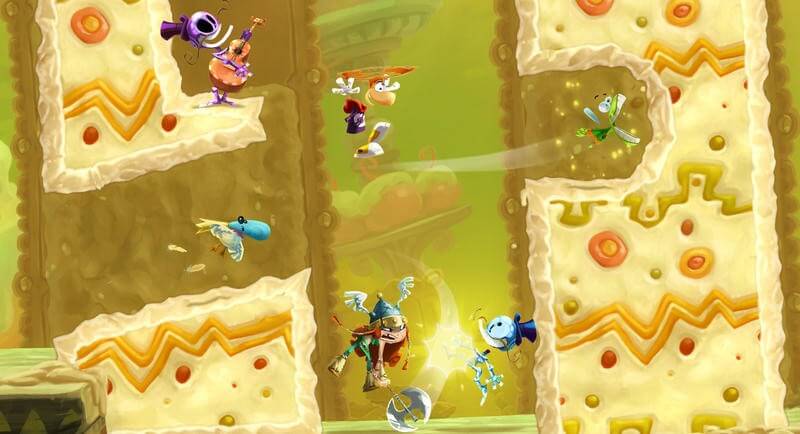 One of the most colourful and inventive 2D platformers to come out in recent years, Rayman Legends eventually came to Nintendo Switch via its definitive edition after a successful release on Wii U. Don’t let this being a port put you off, though, because as far as the best 2 player Nintendo Switch games go, it’s by far one of the best. Not only in how Rayman Legends expertly blends fair challenge with fun level design, but also because how seamless it is to drop in/out of the adventure as a pair.

Rayman Legends Definitive Edition earns its place on this list because it is simply the best way to experience this game with another – made easier thanks to the Switch’s nature to come with two controllers right out of the box. You’ll run, jump and bash your way through various vibrant stages, moving to the beat and hunting for collectibles in a way that never ceases to be freeing or fun. Side-scrollers are a dime a dozen these days, so don’t discount Rayman Legends on Nintendo Switch. 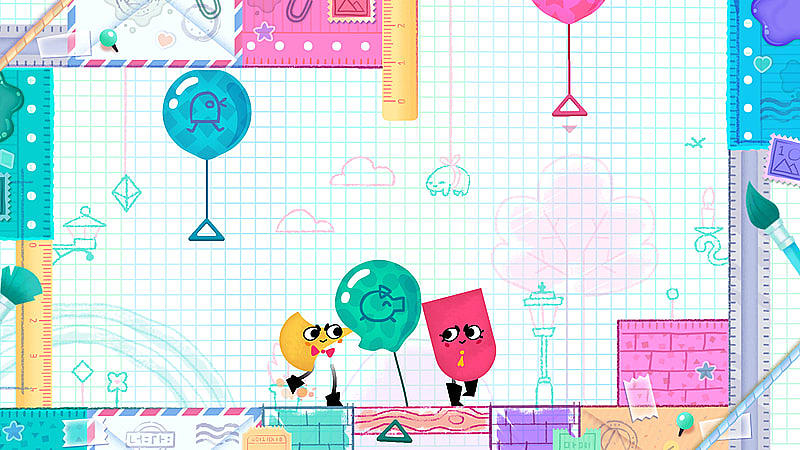 An early Nintendo Switch launch title with creativity at its heart, Snipperclips tasks two players to make their way through various puzzles, cutting and slicing specific shapes out of their characters to progress. Snipper and Clip can both be rotated to fill the shape as needed, altering their bodies to insert into any needed template. Everything is portrayed in a charming papercraft world, making Snipperclips the ultimate 2 player Nintendo Switch game for small kids.

Not too long after the release of the original download version, Snipperclips received a physical edition update known as Snipperclips Plus: Cut it out, together! This updated version packs in 30 new levels that can be played across two new worlds, giving players that want to jump into the game’s papercraft fun even more value.

The cult classic Luigi’s Mansion franchise returned in 2019, this time bringing with it all-new modes that can be played with up to eight players in local multiplayer. You’re still roaming about spooky settings in search of ghosties to suck up with your vacuum, only now you can do so with others either working alongside you or against you. “ScareScraper” is Luigi’s Mansion 3’s co-op mode where you and your team must clear out 25 procedurally generated floors. “ScreamPark”, however, sees you go head to head.

“ScreamPark” features three different match types where teams of four can go up against one another to complete a specific objective. Cannon Barrage sees you score points by wrestling cannonballs away from the ghosts, Ghost Hunt challenges you to catch ghosts the quickest and Coin Floating sees both teams compete to collect the most currency without having their own stolen. Luigi’s Mansion 3 is simply the most feature complete entry yet, easily making our list of the 10 best 2 player Nintendo Switch games. 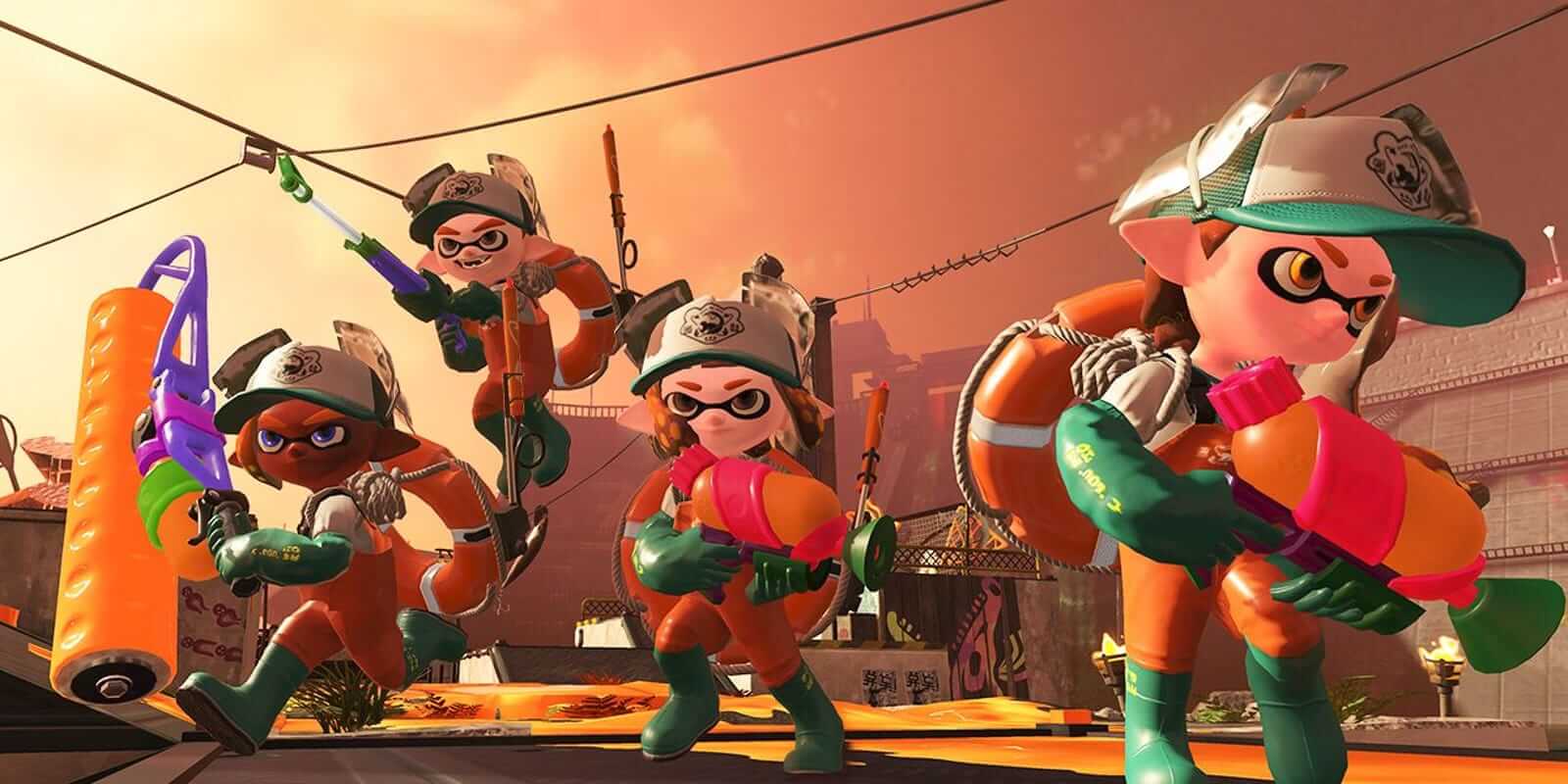 The Splatoon series came back with a bang in 2017, coinciding with the launch of Nintendo Switch to offer online shooting fans something a little more colourful compared to the mass of brown and gritty genre entries. However, as well as being great for splatting others with creative weaponry online, Splatoon 2 also boasts one of the deepest and most feature-complete co-operative portions on the platform, which makes it perfect as a 2 player Nintendo Switch game.

This Splatoon 2 co-operative mode is specifically called Salmon Run, where you and up to three other players fend off waves of fishy enemies to see how long you can survive. There are three different waves to take on across a wide variety of maps, and during each wave you and your team will be required to rescue eggs from enemies and bosses to take them back to your home base. Salmon Run once again proves that shooting is fun when there’s more ink and paint involved, easily making it one of the best 2 player Nintendo Switch games currently out there. 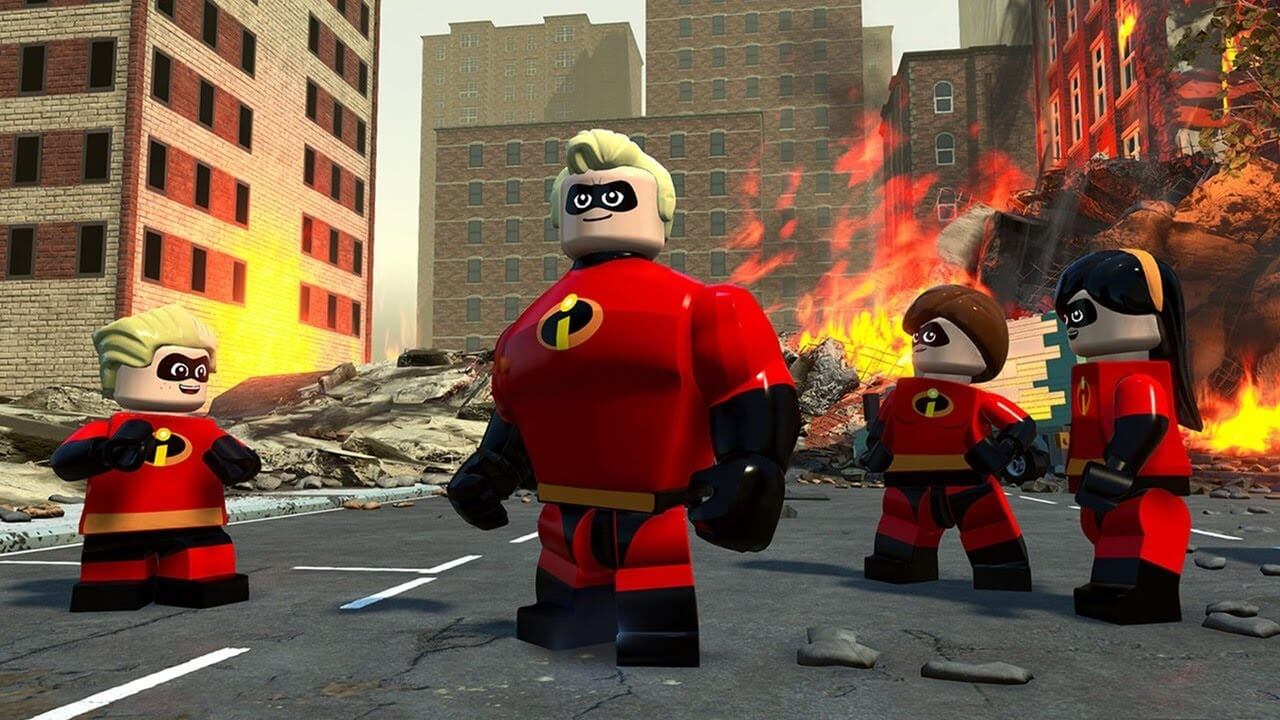 TT Games has created countless beloved LEGO games based on Hollywood properties throughout the years. How then do you select just one for this list of the 10 best 2 player Nintendo Switch games? It’s an impossible task, but we’ve gone for LEGO The Incredibles, which not only features characters and levels relating to Pixar’s superhero family but other famous franchises like Toy Story, Cars and A Bug’s Life. It’s 3D platforming perfection for all types of co-op players, sure to put a smile on every family member’s face.

You and another will be able to play through the events of both Incredibles movies, smashing and bashing your way through LEGOfied locations you’re bound to recognise. Combat is made more thrilling, though, thanks to each character boasting unique abilities that come in handy to solve puzzles and overcome obstacles. LEGO The Incredibles can only be played locally in the same room, but it’s still an excellent co-op candidate and is easily one of the best 2 player Nintendo Switch games. 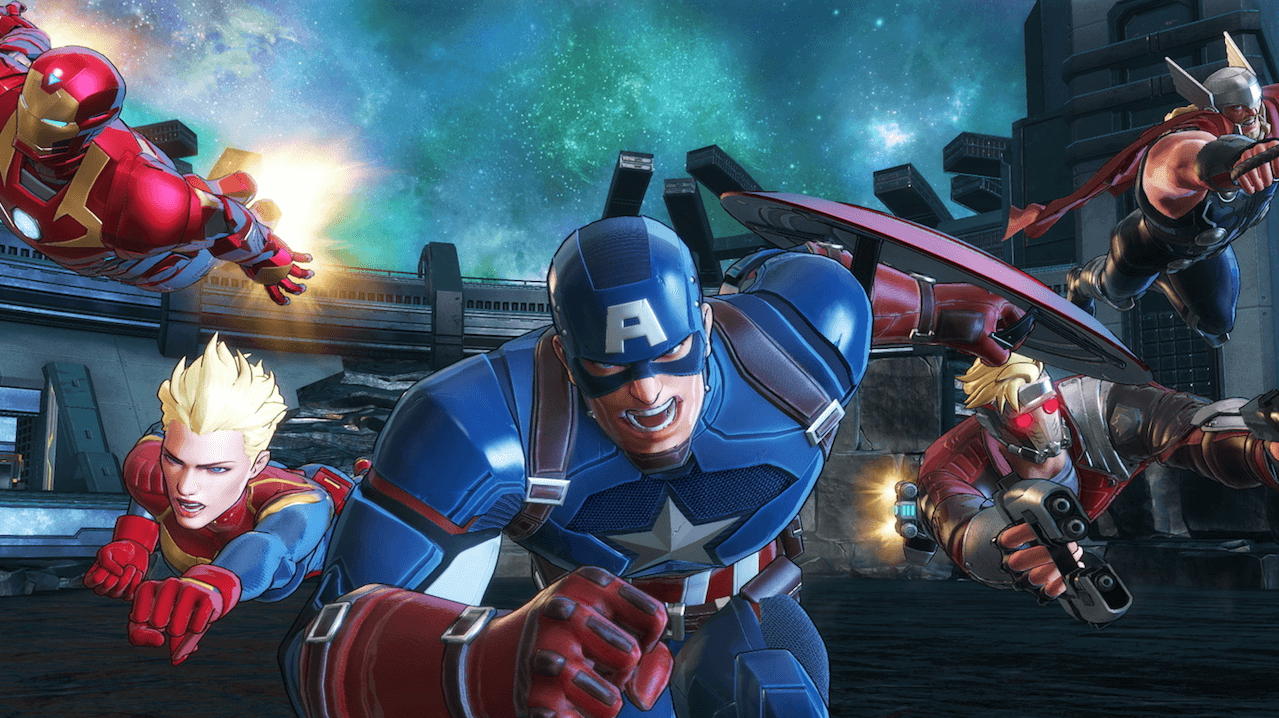 Marvel’s cult classic ‘Ultimate Alliance’ franchise finally returned in 2019, giving players more of the super-powered hack-and-slash action they loved – all played out from an isometric perspective. The roster featured in Ultimate Alliance 3 is simply one of the biggest to feature in any Marvel game, letting players take hold of such icons as Spider-Man and Wolverine, but also less mainstream comic book heroes like Miss Marvel and Ghost Rider.

Playing through Marvel Ultimate Alliance 3: The Black Order works as a whistle-stop tour across many familiar Marvel locations, all of which can be enjoyed as you beat down legions of faceless bad guys alongside up to four other players. It’s exclusive to Nintendo’s hybrid platform, making it a must buy for anyone seeking an ideal 2 player Nintendo Switch game that can’t be played anywhere else. 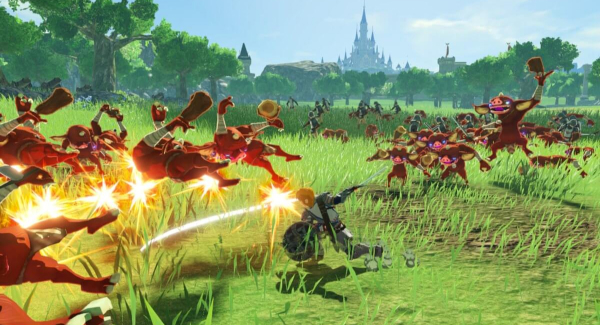 Ever wanted to slay hundreds upon thousands of monsters as The Legend of Zelda: Breath of the Wild’s eclectic cast of characters?HyruleWarriors: Age of Calamity is the perfect stomping ground to do it, serving as a more action-focussed prequel that features local split-screen multiplayer to let teams of two slash and swipe their way throughout all of Hyrule Kingdom. You can do so either as expected series mainstays like Link, Impa and Zelda, but also as popular newcomers like each of the four champions.

Every playable character boasts a distinct move set that makes them a force to be reckoned with when wanting to hold back the calamitous evil forces of Ganon. Hyrule Warriors: Age of Calamity makes our list of the 10 best 2 player Nintendo Switch game because it feels immensely empowering and satisfying to wade through hordes of enemies with a local friend by your side. This Breath of the Wild successor is a great reason to share a Joy-Con controller. 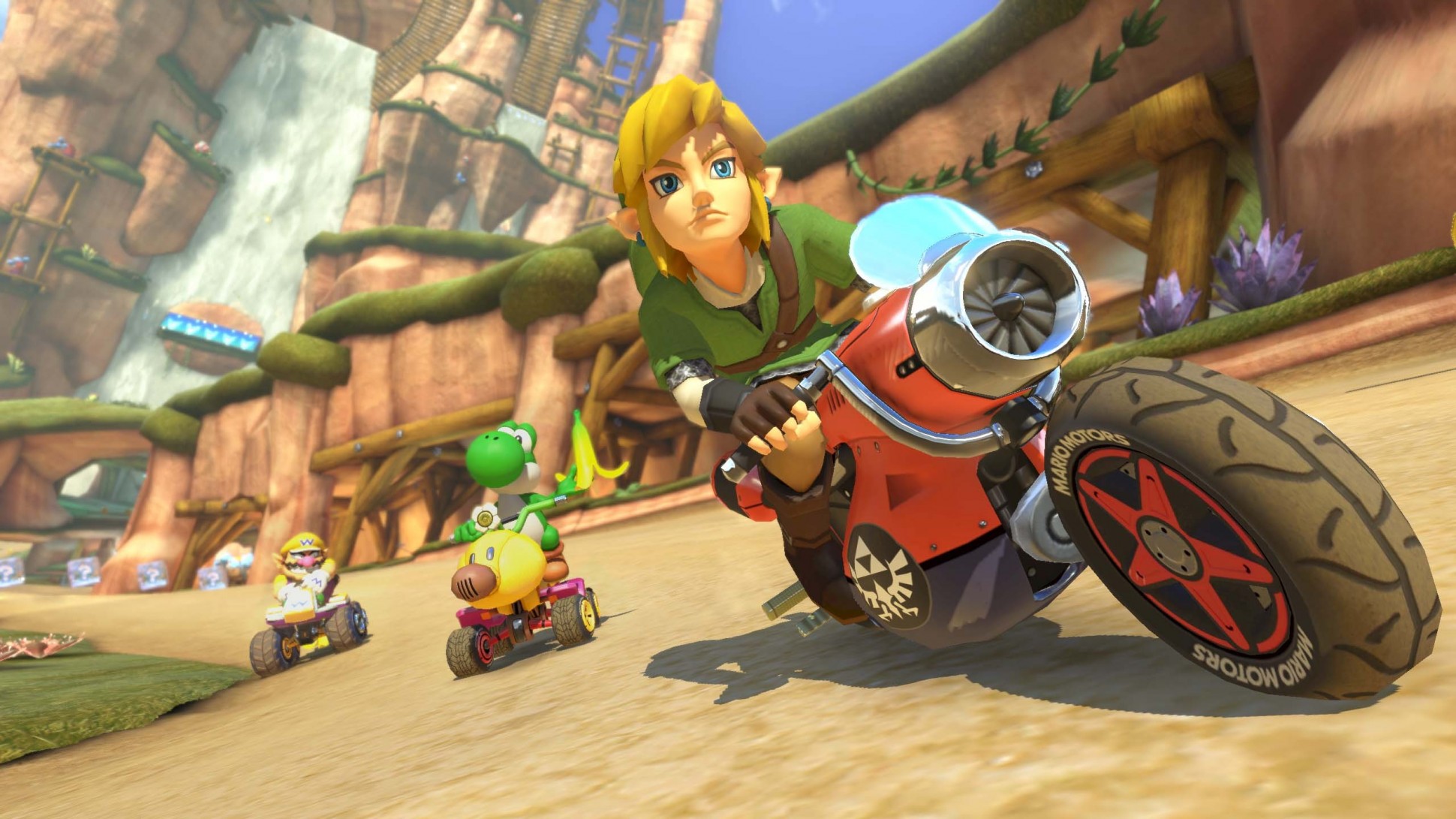 Initially released for the Nintendo Wii U in 2014, Mario Kart 8 quickly became thought of as the definitive entry into one of the biggest racing franchises on the planet. For this reason, Nintendo released it again for Switch rather than develop a new entry, giving players more of what they love with a few new extras. Mario Kart 8 Deluxe, for instance, saw the inclusion of all-new characters like the Squid Kids and Link from the Legend of Zelda.

Mario Kart 8 Deluxe also includes all previously released DLC tracks and karts, bringing the total number of tracks to a staggering 48. This makes it the perfect way to kill time or have a fun afternoon with another player, rendering Mario Kart 8 Deluxe unabashedly one of the very best 2 player Nintendo Switch games out there. All the karts feel great to handle and the track design has never been more creative. 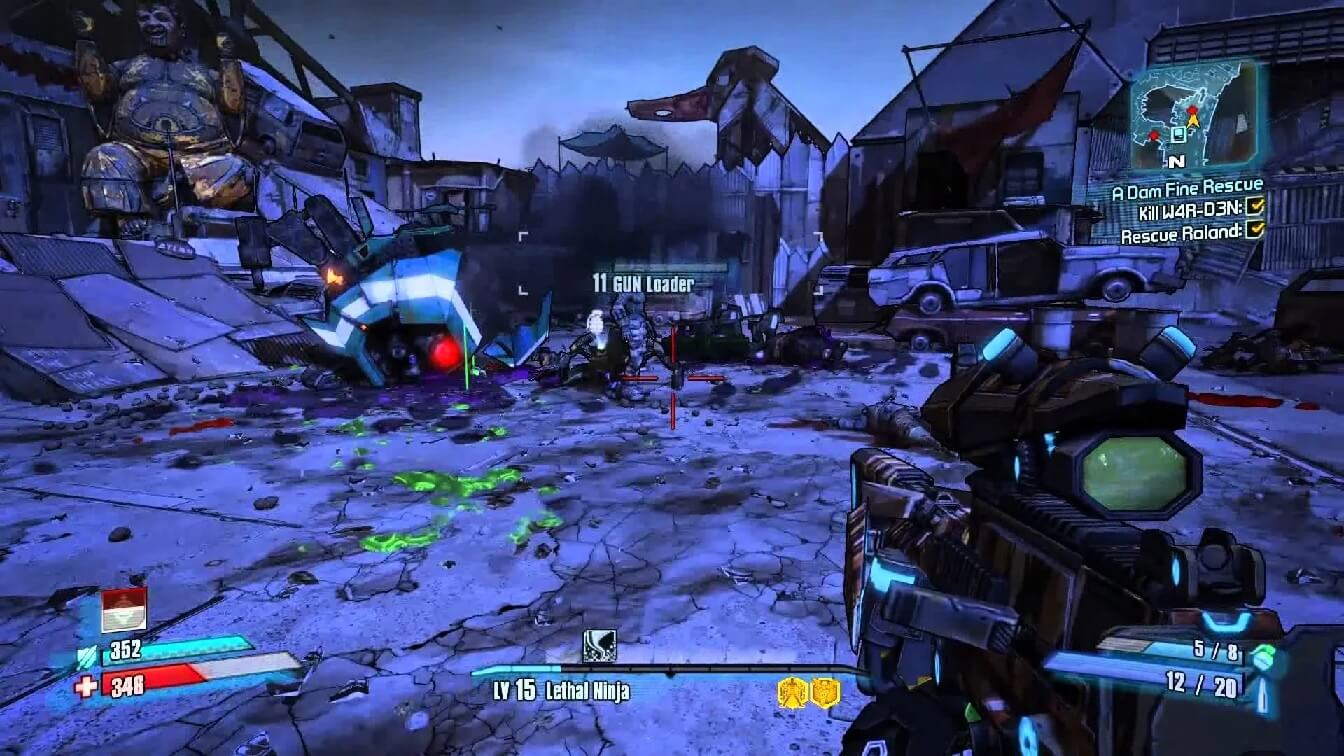 The most recent entry on this list is also one of the best 2 player Nintendo Switch games currently out there. Borderlands The Legendary Collection bundles together the first game, its sequel as well as 2014’s Borderlands The Pre-Sequel, with all three titles fully supporting local 2-player co-op on one console as well as four-player co-op online on multiple. This package represents a whole lot of value, seeing you and up to three other friends shoot and loot your way across the galaxy.

Also, thanks to the series’ trademark cell-shaded art style, Borderlands The Legendary Collection looks just as good as any other version – except now you can take all three games with you on the go. Choose your vault hunter, build up your personal class and begin a planet-hopping adventure to find the best weaponry. Borderlands The Legendary Collection is easily one of the best 2 player Nintendo Switch games for all these reasons and many more. 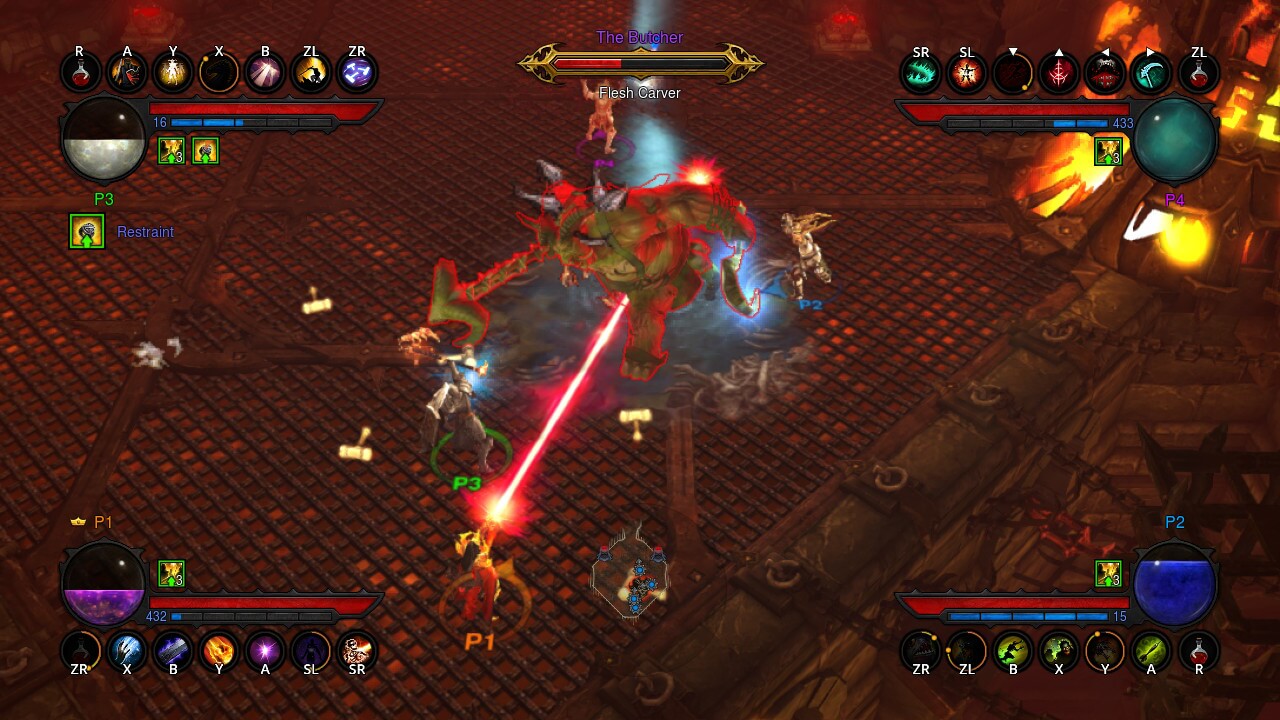 Our top pick for the best 2 player Nintendo Switch game is Diablo III: Eternal Collection, an isometric dungeon crawler that began life on PC and other consoles, before bringing its mass amounts of content to the Nintendo Switch. What’s more, this edition includes all previously released DLC, such as the Crusader and Necromancer classes, to make killing foes and hunting for loot alongside friends even more satisfying and addictive.

It’s easy to lose endless amounts of hours in Diablo III: Eternal Collection on Nintendo Switch, especially since that all the loot you find is randomly generated. You play the game always in pursuit of unlocking further upgrades for your character and the best possible gear, preparing for the run through the next challenging dungeon. Diablo III is one of the best – but even better when played with up to three other players.