With the success had by Epic’s colourful shoot ‘n build game Fortnite continuing to reach global heights, it was only a matter of time before another Battle Royale title would arrive to provide stiff competition. Apex Legends, developed by Respwan Entertainment (creators of Titanfall), is that game – and its decision to work from a free-to-play price model makes jumping in and checking it out a no-brainer for players that are curious about the craze.

However, also similar to Fortnite, Apex Legends offers its own version of a purchasable starting pack of sorts; the idea being that it will provide an ever so slight leg-up when first starting out in the game. It’s called the Apex Legends Founder’s Pack and is available in the UK for £24.99. It’s important to note that what’s included in the pack won’t make or break your experience in Apex Legends necessarily, just give you a little boost in addition to a few cool-looking aesthetic skins.

The biggest question is when picking up the Apex Legends Founder’s Pack is obviously what’s included in it. It currently includes the following items:

Apex Coins act as Apex Legends’ in-game currency, used to purchase new customization items for characters and weapons from the game’s direct purchase shop. Those familiar with how digital currency works in Fortnite need only think of Apex Coins as a pallet swap for V-Bucks: its what’s used to purchase cosmetic Apex Packs, or to unlock new characters. There are six characters free for anyone to use, but two more that can either be bought with Apex Coins or unlocked over time.

The rest of the Founder’s Pack’s contents is a lot more straightforward, mainly consisting of cosmetic items that don’t affect gameplay, simply providing added visual skins – specifically for characters Wraith, Bloodhound, and Gibraltar. These, the banner frames and the aptly named Founder’s badge are currently only available with the Founder’s Pack as exclusive goodies. 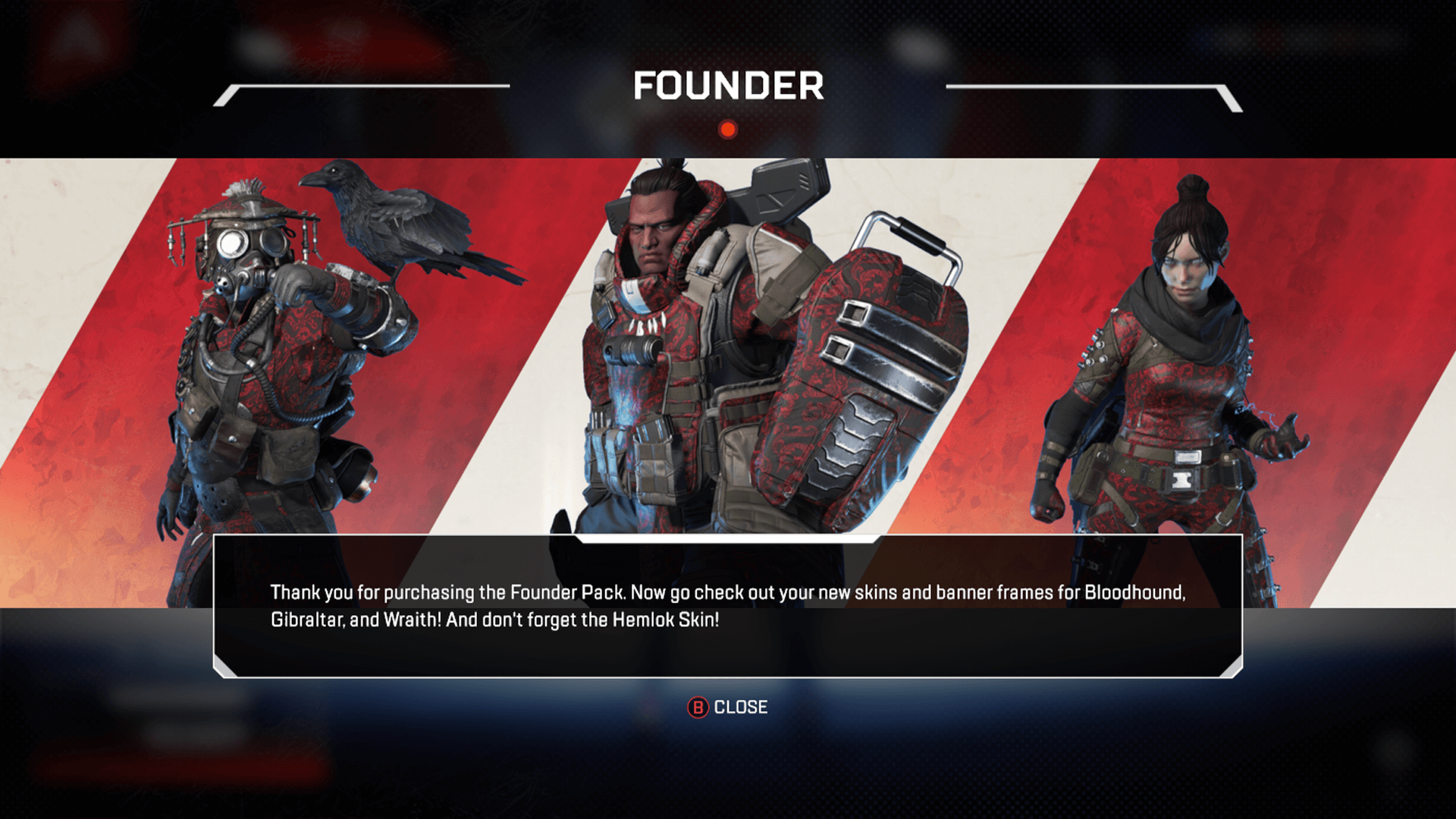 Do I need to buy the Apex Legends Founder’s Pack?

Simply put, no. As has hopefully already been made clear the Apex Legends Founder’s Pack is not essential for playing Apex Legends. The game itself is free-to-play, meaning all you need to do to get started is download the game from either the PlayStation or Xbox Game store. The only advantage you’ll get buying the Founder’s Pack are the exclusive cosmetics; even the 2000 Apex Coins included can be purchased separately.

Where can I buy Apex Legends Founder’s Pack?

The Apex Legends Founder’s Pack can be purchased on your respective platform of choice’s online store. Simply type “Apex Legends” in the search bar and it’ll appear as one of the top results. Don’t be too surprised, however, if you start seeing it show up on physical store shelves much in the same way Fortnite’s Deep Freeze pack recently did on PS4, Xbox One and Nintendo Switch. Apex Legends hasn’t yet made its way to the latter, but we at Console Deals will keep an eye out for when the Apex Legends Founder’s Pack does appear as part of a bundle on the other two bundles.